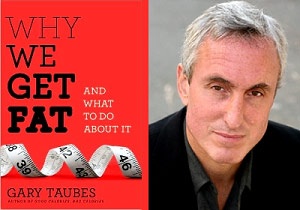 In last week’s post we contrasted the “energy in/energy out” model of getting fat with the “wrong kinds of food” model. This framing comes from Gary Taubes’ book Why We Get Fat. Again, be warned I’m a fan of Taubes and his book. With that said, in this post I wanted to cover Taubes’ core arguments, but then contrast it with where the scientific consensus on obesity appears to stand.

The “Carbs Make Us Fat” Thesis

The biological thesis of Why We Get Fat is straightforward.

The solution is just as simple. To stop being fat you need to eat fewer carbs, especially refined carbs which trigger the strongest insulin response.

The insulin pathway is well understood from diabetes. In fact, people with diabetes who inject insulin in the same spot of the their body will over time develop lipohypertrophy, which is pockets of fat under the injection site. You can see an example of this in the picture below, where the fat bumps above the knees are insulin injection sites. Obviously insulin stimulates fat cell production. The larger implication is foods which overstimulate insulin production make your entire body fat. Getting fat is a hormone regulation problem, not about overeating. That’s a testable hypothesis with a clear biological justification.

Gary Taubes is a Partisan

Now Taubes’ book is not a diet book in the sense of providing recommendations on what to eat each day of the week. Instead it’s a footnote heavy diatribe against the energy in/energy out model, and a partisan argument for reducing carbs to avoid obesity. And Taubes is often arrogant and dismissive of people he disagrees with. In fact the first part of the book shows lots of pictures of non-western fat people. Taubes is making the point that obesity is not limited to rich westerners, but unintentionally comes off as condescending to all non-westerners in the process.

And as more of an aside in the book, Taubes also claims that fat, red meat and salt are not bad for you. He makes this point because most low-fat foods retain their taste by replacing the original fat with sugar. So low-fat diets tend to be high carb, and ironically make you fat. In a nutshell, bacon is good for you. From there it’s easy to see why people can be turned off by the book. Nonetheless, while Taubes is undoubtedly arrogant and partisan, as far as I can tell his science appears solid.

Let’s look at an example. In March 2012 the New York Times published an article about a study showing red meat increases risks of cancer and heart disease. This was an “observational study”, which means they observe people over time and then after the fact try to construct conclusions based on statistical correlations. Taubes and others have argued this type of retroactive correlation study is plain bad science. In fact it’s the core reason you see so many contradictory diet studies year over year. Here is Taubes in a 2007 NY Times piece debunking “observational studies” as an approach. Plus a take down of the 2012 red meat article from Taubes here and others here.

Contrast this with a more recent NY Times piece on the Mediterranean Diet. This was not an observational study, but a randomized diet trial where people are randomly assigned to diets to test what happens. Much more rigorous than an observational study. Here’s a deeper look at the results, which were positive for losing weight and heart health. What you may not be aware of is the Mediterranean Diet cuts back on carbs, since participants are “discouraged from consuming bakery goods, sweets, pastries, red meat, processed meats, and spread fats”. The scientific question left open by this study is whether the good results come from cutting carbs or from cutting other types of foods like red meat.

Let’s take a look at what the American College of Sports Medicine and the American Heart Association put out in their last physical activity guidelines (2007): “It is reasonable to assume that persons with relatively high daily energy expenditures would be less likely to gain weight over time, compared with those who have low energy expenditures. So far, data to support this hypothesis are not particularly compelling.” In other words, the energy in/energy out model doesn’t work. But you’ll still hear it from most doctors. Why? The newer models around cutting back on bad food are not yet scientifically agreed on. Low carb diets as a class used to be considered bad because they weren’t proven to work. Now the concern with them (not proven either way) is on long term health effects. So while no longer considered crank science, low carb is not generally endorsed either.

As I mentioned last week, the newer diet models can be called “subtractive diets”. While you can’t eat the subtracted disallowed foods, you can still eat as much as you want of the allowed foods. The low carb, meat heavy Atkins diet favored by Taubes was the first of these, but nowadays you have also have low GI diets (from diabetic treatments), Paleo diets, Mediterranean diets, etc. We even have Michael Pollan’s wonderfully concise rule of: ”Eat food, not too much, mostly plants.” I really like Michael Pollan’s food writing, but think he tends to be more politically correct than scientifically correct. Anyway, one thing all these diets have in common is they cut down on refined carbs like chips, juice, pastry, pasta, bread and sugar. Where they differ is in how they define other “junk food” to avoid. For example, is bacon good or bad?

Looking ahead, in 10 or 20 years the shift away from the energy in/energy out paradigm will be complete. And by then we’ll know a lot more about which subtractive diets work best. In the meantime, good advice might include:

For what it’s worth I’m on a sort of “medium carb” diet myself, where I still eat pizza and bread off and on. But if my weight creeps up, then I dial back the carbs. This is working for me. My weight is stable and down 15 pounds from when I changed my diet a year and a half ago after reading the book. And by the way, it turns out large portions of bacon are quite tasty. Though your own mileage may vary.

Finally, if you can’t get enough of this, click below to watch an hour long video of Gary Taubes speak about his book at the University of Texas. But skip ahead to the 8:30 mark to avoid the tedious introductions.