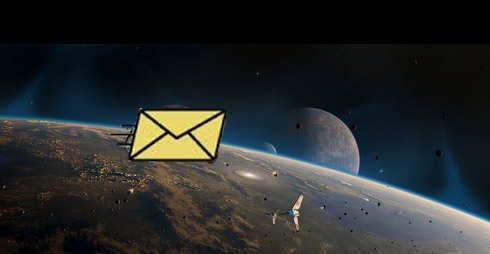 “The Post Office Is Dying Because We Don’t Need It Anymore” says a recent headline. And yes, mail volume decreased 22% in the past five years. Yet mail is still being used for that most modern of tasks, moving extremely large computer files. In computer jargon, moving data by carrying a computer hard drive around is called “sneakernet”. The classic quote being “never underestimate the bandwidth of a station wagon full of tapes hurtling down the highway.” To see if the Post Office’s demise is assured, let’s project into the future. The really far future.

First let me crib from the always great xkcd answering the question: When – if ever – will the bandwidth of the Internet surpass that of FedEx? Surprisingly, for huge files FedEx is 100x faster than the internet. Consider Google moving Hubble telescope data:

Google’s initiative to transfer all the Hubble space telescope data is a good case study. The Hubble data takes up 120 terabyte (120,000,000,000,000 byte). How does Google transfer it? Not over the internet. Instead they send actual physical disk arrays via regular mail, something they have dubbed, for fun, FedExNet. This allows them to get the data within 24 hours.

To transfer the same amount over the internet in 24 hours, Google would have to be able to achieve transfer rates of more than 11 gigabit/s running constantly maxed out. On a regular 100 megabit connection, transferring 120 terabyte of data would take almost four months (111 days).

Of course the trade-off here is latency. That is, it takes 24 hours for FedEx to move anything, not matter how small. So the internet is far faster for smaller files. Furthermore the cut off for “smaller files” grows every year. A few decades ago it was faster to mail a DVD than stream it. Going back 150 years, a telegram was faster for short messages while pony express was faster for a box of books. And there’s no theoretical reason for this trend to end. The cut off for sending data by mail will continue to rise, but there’ll always be a point at which mail is faster. At least if you stay on Earth.

So let’s go big and look at sending data to Mars. The Mars curiosity rover has 2.5GB of data on board, less than a typical USB thumb drive. And it can send data back to Earth at 256 kbit/s, but only for 8 minutes/day due to orbital alignment. This means it can send 256 * 8 * 60 = roughly 120MB a day. Which means it would take about 20 days to transfer all 2.5GB of Curiosity’s software data. What if we want to send data by physical media? Well it took the Rover about 8 months to get to Mars, which is roughly 12x longer than 20 days. So if we sent 12 x 2.5 GB = 30GB it would be faster to send by spaceship. All we’d need to send is a mundane 32GB thumb drive which costs about $40 and weights 1.4 ounces. So we’re talking a very small spaceship, smaller than your pinky finger. Of course the trade off is it takes 8 months to get there, versus only 14 minutes (depending on orbital positions) for a radio signal. So it’s still much faster to send small amounts of data electronically, as expected. One final caveat is the Mars Curiosity Rover radios are optimized for their mission, not for fast data transfer per se. But even if we sent astronauts to Mars with faster radios, the general point would hold.

Now let’s go really big. What happens if send data to the stars? Sneakernet to the stars actually has a formal name. It’s called a Bracewell probe, after Ronald Bracewell’s 1960 paper. Robert Freitas has written extensively about probes versus radio, so let’s pull from his work.

Once we get to sending data between stars the primary question becomes what’s more energy efficient. In the theoretical limit Freitas says radio is more efficient, though as data rates go up sending physical probes becomes comparable. But radio has some big downsides. From another Freitas paper:

The costs to transmit observable radio signals or observable probes, over the duration of an entire exploration program covering, say, the nearest million stars, also are comparable. For example, operating a 1-gigawatt beacon for 1 million years takes exactly the same amount of energy as sending out a fleet of 100-kg 10%c (10% of the speed of light) probes to each of the same million target stars at the rate of one per year. During this time the, beacon will probably elicit no response to its call and thus yields zero knowledge, whereas the probe fleet is certain to have returned, comprehensive data on a million nearby solar systems even if no intelligent life is found; the former approach seems more cost-effective. Further, if the probe is self-replicating only one initial device need be sent out, a strategy that costs thousands of times less energy.

In fact Freitas has been pushing to spend SETI (Search For Extraterrestrial Intelligence) funds looking for probes lurking in our own solar system. I’ve written about the Fermi paradox and self replicating probes before, so my personal take is we’re likely alone and no aliens out there. With that said, I think Freitas is quite correct in saying if we do SETI at all, we should search for aliens not just by radio but by looking for probes. And those probes don’t have to be big. They could be football or people sized and still pack massive amounts of data at the molecular level. Remember our Mars example with the thumb drive. Looking for probes also makes sense since we’ll eventually send them out ourselves, provided we don’t end civilization with a zombie apocalypse.

So if we ever colonized another star system, how would we communicate back to Earth? Well, we’d use the same telegraph/pony express trade off as before, only on a super scale. It will take decades or centuries for communication to cross between stars. In the Freitas scenario above probes move at a 1/10 the speed of light. So radio is 10x faster for small data sets. But for big data, we’d have no choice but to snail mail to the stars. The Post Office will never die.

Postscript: I recently read David Brin’s science fiction novel Existence, artwork pictured below. An astronaut discovers a football sized alien probe full of avatars. But they turn out to be information viruses that trick civilizations into destroying themselves by building and replicating more probes. I’m a fan of David Brin and love this hard sci-fi concept. And yet can’t fully recommend the book. Brin gets bogged down in SETI exposition not relevant to the excellent evil avatar plot. Nonetheless I had to cite it. A great example of mail to the stars. Even if star mail’s ultimate purpose turns out to be spreading alien mind spam.