Recently my son came home from kindergarten and told me: “Dad. Darth Vader is Luke’s father.” He had never watched Star Wars. So I asked how he knew. He said “they told me on the playground.” Hmmm….on the playground. Then I recalled the only Giants baseball game we went to this summer had a Star Wars theme. Clearly good parents instruct their kids on the difference between Yoda and Chewbacca. So even though common sense media says the recommended ages are 7-11, we watched all six Star Wars movies. One per Saturday over the next month and a half. I hadn’t seen them in a long time, so it was great fun. Though I doubt I’ll see them again. The unexpected surprise was discovering the internet consensus on Star Wars….is completely correct.

Researching something on the internet normally reminds me of this classic xkcd:

Hence the puzzle. Why is the internet right about Star Wars? Let me step back a bit to explain. Before watching the Star Wars movies, first we had to decide what order to view them in. Below are the movies listed using George Lucas’ numbering scheme, which matches the chronological order of the Star Wars universe:

The two obvious choices are watching in chronological order 1,2,3,4,5,6 or in release year order 4,5,6,1,2,3. I asked the internet. To my surprise, turns out both are wrong. The correct order is “machete order”, which goes 4,5,2,3,6. Completely skipping episode 1. You can read the full 3000 word explanation of machete order from Rod Hilton here.

Let me summarize Hilton with some quotes:

In fact I looked up interviews and confirmed the centrality of Anakin. Here’s Lucas: “The epic itself is basically about one man.” And “The story [is] about Anakin Skywalker and his fall into the dark side and redemption by his son.”  The Anakin storyline was the center of the scripts Lucas wrote. Episode 1 begins Anakin’s life. Episode 6 ends it. But the movies that actually got made shortchanged Anakin’s character. Machete order correctly puts Luke at the center of the series.

Let me illustrate with an example from episode 6. Note I’m pretty sure I picked up on this while watching because I was primed from reading about it earlier, though honestly can’t recall. Anyway, in the final climatic fight between Luke and the evil Emperor the camera spends a huge amount of time very tight on Vader, showing how he’s agonizing over what’s going on. Bringing a tight frame on a face to register emotion is film school 101. What makes these shots utterly fail is you can’t see the actor’s face! All that gets revealed in tight close up is an unmoving plastic mask that looks noticeably cheap when zoomed in. 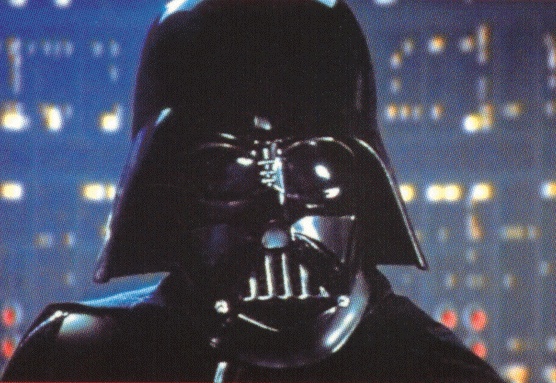 It would have been better if Luke had sliced open Vader’s mask, symbolically breaking free the humanity lurking within his own father. That would also have allowed us to see Anakin’s face so the actor could, you know, act. I took the image below from a quick search on “vader with broken mask”. It’s from a cartoon spin off episode. Not perfect, but gives you the idea.  The internet has already thought of this.

A few more things the internet gets right about Star Wars:

Every time I poked around the internet I got a solid, deep and correct answer. Very disorienting. Finally I looked up an older review of Empire Strikes Back from the New York Times in May 1980 when the movie first came out:

The Empire Strikes Back” is not a truly terrible movie. It’s a nice movie. It’s not, by any means, as nice as “Star Wars.” It’s not as fresh and funny and surprising and witty, but it is nice and inoffensive and, in a way that no one associated with it need be ashamed of, it’s also silly. Attending to it is a lot like reading the middle of a comic book. It is amusing in fitful patches but you’re likely to find more beauty, suspense, discipline, craft and art when watching a New York harbor pilot bring the Queen Elizabeth 2 into her Hudson River berth, which is what “The Empire Strikes Back” most reminds me of. It’s a big, expensive, time-consuming, essentially mechanical operation.

It gets snarkier as you go along. At last! Someone condescending and wrong on the internet. Contrast that to a review of Empire from 1997,  written 17 years later, which starts: The Empire Strikes Back is the best of three Star Wars films, and the most thought-provoking.

I think we’ve solved our puzzle. Albeit with something my mom could have told me. People were “wrong on the internet” long before the internet existed. Just look back in history to when, say, Winston Churchill spent his evenings drowning his sorrows due to people being wrong on the cable telegraph. Unfortunately people are often wrong about contemporary events. What Star Wars reminds us is it can take decades to gain the perspective needed to set the story straight. This week’s snarky and condescending review of Ender’s Game is a relevant case in point. In fact there’s a new Star Wars movie coming out in 2015, Episode 7. The obvious takeaway? Take early internet reviews with a grain of salt.

As for us, we decided to watch clunker Episode 1 after all. Can’t have our kids learn about pod racing on the playground. So we watched them 4,5,1,2,3,6. The internet tells me this is “Ernest Rister Order”, so I’ll go with it. And the best part of Episode 1? In the middle my daughter suddenly spoke up with an annoyed tone: “I really don’t like Jar Jar.” Yes! Learning the truth, she has. Proud of her, I have become. Disliking Jar Jar was the final test. Her Jedi training is now complete. No more have I to teach her. The force of the movie critic runs strong in my young padawan.