In keeping with my new year’s resolution/prediction to avoid publishing longer articles until they’re fully baked, this first post of the new year won’t be the (unfinished) article I’m working on. Instead, it’s links and commentary to other people’s work. If you follow tech, you’ve already seen everything below. But this blog has a futurist, almost sci-fi slant, rather than being hard core tech. So in case you missed it, read on.

Benedict Evens had a recent piece on how the scale of the mobile telecoms industry at 4 billion phones dwarfs the existing PC industry at 1.7 billion PCs. As Evens writes: “suddenly tech companies could sell to an industry with $1.2 trillion annual revenue, and suddenly mobile operators are faced with people who think about product cycles in weeks rather than years. Both sides are slightly shell-shocked, and I often feel that neither has quite internalised the scale of the change.” Great piece, check it out. Plus his podcast is here. 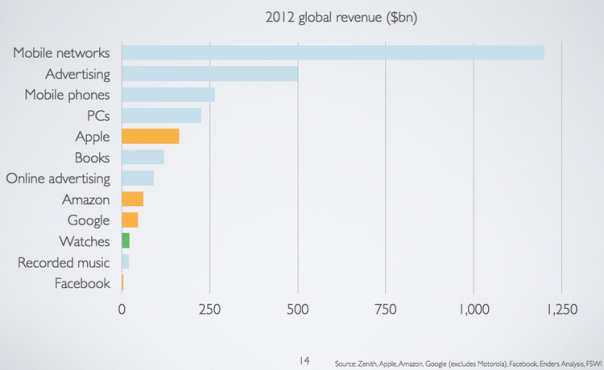 Horace Dediu at Asymco also had a recent piece on internet scale and growth. In the chart below we see that global internet penetration at the end of 2012 was 35%, or roughly 2.2 billion individuals.

Based on this history, it becomes possible to project that 2013 penetration reached around 39% or 2.78 billion individual users. It also suggests that “saturation” could come between 2030 and 2035. If we look at growth, the inflection point comes in 2016. Thereafter internet user growth will slow. Overall, the growth pulse of the Internet will be approximately 40 years long. We are therefore nearly half-way through.

It might seem an interesting but benign fact, however I must caution that as we’ve seen with smartphones, once the point of inflection is reached, investors tend to flee the sector. That in itself may not be a bad thing but investment flight has deep effects on “ecosystem” participants.

Venture investments tend to feed entrants disproportionately and they are remarkably sensitive to the valuations of public companies (and IPOs). These investment might therefore be in danger in two years. Plan accordingly.

Horace Dediu as usual bringing the awesome with his amazing charts. Check out his full piece. Plus his podcast is great as well, in particular the recent episode on Google.

Ben Thompson is one my favorite analysts in tech, and not (full disclosure) because he’ll occasionally retweet my posts

. The reason is he tends to have a quirky liberal arts slant to things, rather than being a pure “grind it out” tech analyst per se. This can have erratic results, but when it works, it kills. One of my favorites from last year was his mapping of the Social/Communications space as below. It’s an image I find myself coming back to again and again. Great. Check it out.

Finally, compelled against my will to repost this relevant and brilliant Dog House Diaries cartoon. Suspect this whole reblogging thing may have a very bright future ahead of it. Plan accordingly.