It’s Saturday once again, and a lot of interesting stuff came out this week. So here’s what I liked and why.

1. David Reich on genetics and race. Harvard geneticist David Reich has a New York Times piece How Genetics Is Changing Our Understanding of ‘Race’. It’s adapted from his book coming out on March 27 on how ancient human DNA has reshaped our view of our past. His team “has published about three-quarters of all the genome-wide data from ancient human remains in the scientific literature.” That is to say he is arguably the world expert on ancient human DNA, some of which goes back 100k years. Here’s one paragraph:

I am worried that well-meaning people who deny the possibility of substantial biological differences among human populations are digging themselves into an indefensible position, one that will not survive the onslaught of science. I am also worried that whatever discoveries are made — and we truly have no idea yet what they will be — will be cited as “scientific proof” that racist prejudices and agendas have been correct all along, and that those well-meaning people will not understand the science well enough to push back against these claims.

I’d say if this was written 20 years ago, someone like Stephen Jay Gould would have written a widely circulated rebuttal. But in the past two decades genomics has had revolutionary progress, and the scientific consensus has shifted accordingly. So I saw mixed reactions on twitter: bad science, bad for chastising tone, dismissive that geneticists aren’t already candid, generally defending Reich, predicting Reich’s doom by thought police. It’s hard to know what the overall reaction to Reich’s book will be until some time after it’s out. For what it’s worth I consider Reich to be relatively balanced, and someone who is nudging the popular consensus carefully toward the scientific consensus. I look forward to reading his book.

2. Facebook sharing data with app developers. Internet advertising companies have a business model of getting paid to show ads to users. This means (despite widespread confusion on this point) that it’s strongly in their economic interest to show those ads while keeping their user’s data secure from everyone else. Including those paying for the ads. So why did Facebook allow app developers access to data in 2014? The best explanation comes from James Allworth, from his properly titled piece What the F*** Was Facebook Thinking? The short answer: platform envy. He points out Facebook always wanted to be a platform company instead of an ad company. Software platforms are high prestige since they make money by skimming off the top of app developer ecosystems. Like Microsoft, or Apple taking a 30% cut on apps. Whereas getting money from ads is perceived as low class. Something Mark Zuckerberg strongly wanted to avoid. So from 2012-2015 Facebook was in denial. They tried to be a platform company by giving access to their data to app developers, encouraging them build out their platform. They didn’t sell that data (again a point of confusion). And all this stopped in 2015 once they realized selling ads was their destiny. Back to today. In 2018 Facebook is being blamed for the election of Donald Trump. So this story went into hyperdrive. Even though all of this info was available years ago, and in 2012 the Obama campaign also used Facebook data in a very similar fashion. If you want to read more, I’d suggest James Allworth as mentioned above, Ben Thompson on how regulating Facebook is ironically helping them lock in their position, Ross Douthat on how cable TV had far more to do with Trump’s election than Facebook, Ezra Klein making a similar point, Andy Kroll on how Cambridge Analytica (who leaked the Facebook data) are relentlessly successful self-promoters but clueless in their claim they can swing elections.

3. Sons of wealthy black men do worse than daughters. The New York Times has an occasionally confused but generally correct portrayal of the new Raj Chetty et al paper. The graphics are first rate. Yet the key chart below is still easy to misunderstand. The x-axis is income percentile of parents, the y-axis is income percentile of their children. Note that black and white women on the right look similar. But this doesn’t mean black and white women make the same amounts! Take the 70th percentile on the x-axis for women on the chart below. A far higher fraction of white women are sitting there than black. So what is the chart for? It’s saying that for those already at the 70th percentile (larger fraction of whites than blacks), their daughters make around the 50th percentile (reversion to the mean). And this reversion for daughters is roughly the same for black women and white women. Now that you get it, see on the left how sons of black men drop in percentile way more than sons of whites. This is an important paper that will rightfully drive a lot of discussion. Here’s the link to the New York Times story. 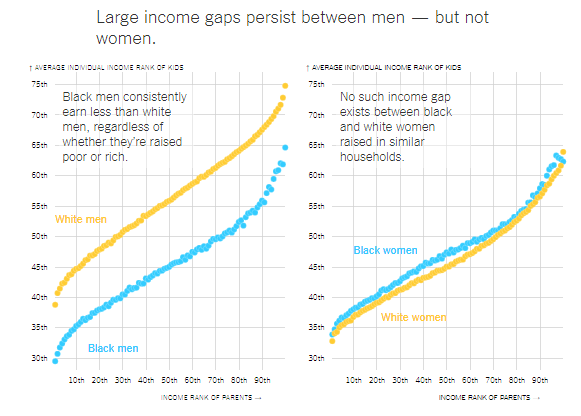 4. The continuing breakdown of American norms. Even if the effect of Facebook on the 2016 election is overblown, that doesn’t mean all is well. As a recent example, Donald Trump said Joe Biden would “go down fast and hard, crying all the way“. This was in response to Biden saying if he heard Donald Trump boasting about sexually assaulting women in high school, he’d have taken “him behind the gym and beat the hell out of him.” Sometimes when I try to understand politics, I imagine a scenario where the Democrats and Republicans have flipped who said what. In this case, imagine the most recent Republican VP Dick Cheney in the second year of Obama’s presidency saying he’d beat the hell out of Obama. And then Obama responding. Yes, Obama’s behavior is outstanding and Trump’s is not. But this is about a former VP saying he’d beat the hell out of the current president in a public speech at the University of Miami as an applause line. What this thought experiment drove home for me is I couldn’t imagine Cheney saying this in public (of course certainly far worse in private). And we’re talking Dick Cheney! In my view this episode, on the margin, helps Trump’s chances of reelection. As it would have helped Obama’s under the thought experiment. My larger fear is the continued erosion of political norms across the board. That is, what will happen after Donald Trump leaves office.

For now, the key takeaway is that Bolton brings to the president’s national security agenda a competence that this White House has lacked. I generally agree with Benjamin Wittes that some of the president’s worst instincts have often been tempered by sheer ineptitude. What makes Bolton dangerous is his capacity to implement those instincts effectively.

6. The case for universal free SAT testing. If you are not aware, universal (and ideally free) SAT testing has strong evidence supporting it being net helpful to the underprivileged. Given the optics on this issue, I don’t expect anyone to change their mind about it. But that’s really too bad. See Freddie deBoer. Or this article on recent studies. If twitter is more your thing, this twitter thread is good and explains the dynamic with personal anecdote.

7. Robin Hanson on Sam Harris podcast. I’ve listened to quite a few podcasts Robin Hanson has done on his new (and excellent) book Elephant in the Brain. It’s about hidden motives in everyday life. In fact I saw him present in person last week in San Fracisco, and it was excellent. Of all the talks/podcast he’s done which I’ve seen or listend to, the Sam Harris podcast is by far my favorite. Despite the sometimes poor audio quality. The crowd got into it and there was a lot of good natured laughing, which precisely suits the topic since Hanson explains it in his book. Recommended. link

8. Neil deGrasse Tyson new season of Cosmos in 2019. People rightfully mock Tyson’s at times self indulgent science communications style. But he takes this show very seriously. And it’s a good fit! Despite some (ok, quite a few) eyeroll moments, my kids liked first season. They are a bit older now, but I still expect we’ll enjoy watching the second season when it comes out. link

9. Eukaryotic cells way better crossover than Marvel Infinity War. The new Marvel movie is marketed as “most ambitious crossover event in history.” This led to a lot of memes, and by now the joke is tired. But the one below was by far my favorite. Eukaryotic cells are the basis of all complex life on Earth. They’re a merger of two completely different kinds of microbes (bacteria and archaea). So let’s finish with that.

Marvel: 'Infinity War is the most ambitious crossover event in history'