The lawsuit filed by Students for Fair Admissions against Harvard has produced enough evidence to prove Asian discrimination and quotas. Though perhaps not legally. This may not be obvious unless you’ve been following it. So I want to consolidate and reblog what I found convincing. Then discuss how this impacts meritocracy.

Stephen Hsu has taken the time to post key charts from the legal documents. So I’ll pull from and recommend Hsu’s blog, which focuses mostly on genomics and physics.

From this post, note the sudden change in Asian admission trend in 1993. 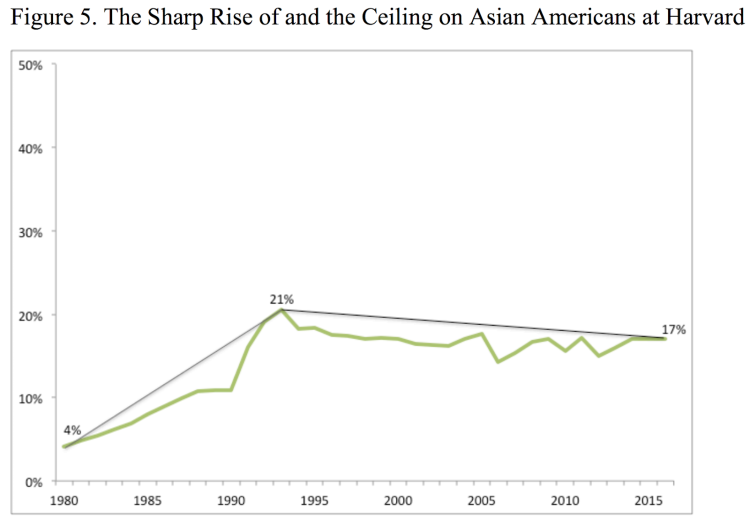 The chart below is from Ron Unz writing in the New York Times in 2013. The tell is the collapse in variation of Asian enrollment rates across the Ivy League. In the 1990s Asian enrollment rates varied widely. Starting around 1995, this variation collapsed towards a ~17% rate, as the Ivy League rolled out a common Asian quota target. Caltech (purple line) is a compare because they have a race blind, test score based admissions process. Pure meritocracy. The dotted line shows the steady increase in college aged Asians.

Again via Stephen Hsu, below is how Asians rate for admissions compared to whites. What jumps out are the negative personal ratings. They were introduced by Harvard in the 1920s to stop Jews from overwhelming enrollment. Been around ever since. 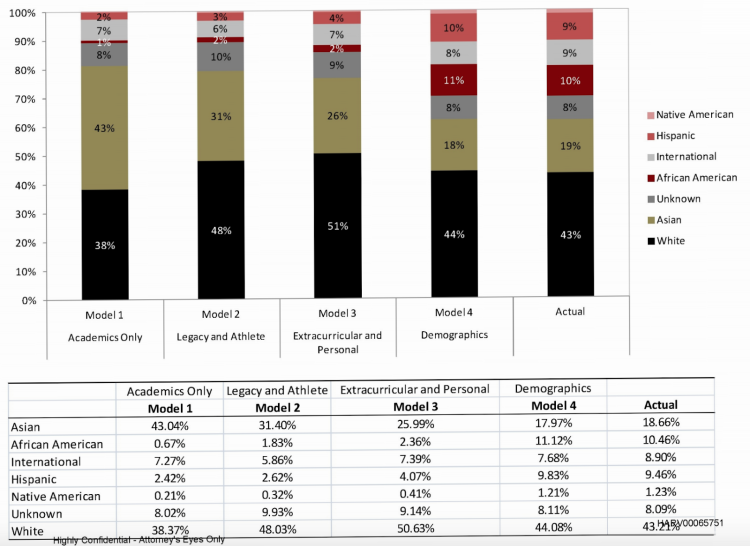 The question of course is why. Here’s Tyler Cowen:

My take is simple.  Harvard is risk-averse with respect to the stream of future donations, as are many other schools.  Asian-American admissions don’t have the same donating track record as the white students traditionally cultivated by Harvard and other top universities.  Either Asian-Americans may seek out “diaspora philanthropy,” or they simply may have a more cynical attitude toward top institutions that they basically have never had any control over.

Furthermore, there is a common fear — repugnant to me I should add — that if a student body becomes “too Asian,” many white students will be less interested in going there.  I taught at UC Irvine for several years and found it to be a delightful experience, but this is exactly what many schools are afraid of (the UCI student body is disproportionately Asian, and the honors class I taught in my first year had only one non-Asian student in it).

And so they come up with every excuse possible — sometimes cemented in by self-deception — for maintaining a “balanced” student body.

Nonetheless, I predict ultimately the status quo will not change very much.  I just don’t see a strong enough popular or judicial constituency for righting the wrongs done to Asian-Americans.  Some kind of partial concession will be made, various terms and standards will be somewhat redefined, and we’ll be back to “rinse and repeat.”  Meritocracy: can’t live with it, can’t live without it.

I have no doubt Cowen is correct nothing major will change in the racial makeup students admitted to Harvard. Despite the lawsuit.

Let me pull one more tweet from a Hsu post. Stuyvesant is an elite New York high school where admission is based purely on a single entrance test. About 30,000 kids take the test each year and about 900 are admitted. Here’s a Stuyvesant teacher being interviewed about Harvard admissions and the lawsuit, realizing mid-interview Harvard discriminates against Asian students from Stuyvesant.

What the lawsuit changes is it makes the Ivy League Asian quota system more visible. It’s gradually becoming common knowledge, and the lawsuit is nudging that process along. And really, that’s the main thrust of this post, making something not visible enough just a bit more so.

As for Stuvesant? It was mostly Jewish until the 1970s. Now it’s 72% Asian. Which is completely unsurprising. So of course, from a recent New York Times story “Mayor Bill de Blasio announced on Saturday a proposal that would change how students are admitted to eight of the city’s specialized high schools, a group of highly sought-after institutions where students gain entry based on a single test.” And “Mr. de Blasio said that if both reforms were enacted, 45 percent of students at the eight specialized schools would be black or Latino.”

I want to end with a plea for less hypocrisy. Even if done only for Harvard’s self interest. It is perfectly ok for Harvard to try to get their student bodies to match the demographics of the country. This is a laudable goal. But doing that means racial quotas, even if hidden behind “character assessments” to make them legal. And perhaps most colleges in America should do the same. But they should do it openly, since in an internet age the data will get out there one way or another. Continuing a pretense of a race blind meritocracy damages Harvard, and by extension it’s graduates. In particular governmental leaders, who draw overwhelmingly from Harvard and Yale. Hypocrisy fuels resentment and partisanship. It is the friend of those who claim the game is rigged.

And lastly, we should allow at least a little bit of diversity in how schools admit students. It should not be illegal to have a few schools here and there using a pure test based admission system. We don’t need many purely meritocratic schools, but America should be big enough to tolerate a few. Caltech is 43% Asian, and no doubt that rate will continue to climb as it tracks demographics. As long as they stay the course. And hopefully Stuyvesant won’t change either, though it probably will.

In the nineteen-eighties, when Harvard was accused of enforcing a secret quota on Asian admissions, its defense was that once you adjusted for the preferences given to the children of alumni and for the preferences given to athletes, Asians really weren’t being discriminated against. But you could sense Harvard’s exasperation that the issue was being raised at all. If Harvard had too many Asians, it wouldn’t be Harvard, just as Harvard wouldn’t be Harvard with too many Jews or pansies or parlor pinks or shy types or short people with big ears.