Here’s 5 links, with commentary, on what I enjoyed reading this week.

1. The shifting language of racism. If you spend time on twitter (guilty), it was impossible to miss the kerfuffle around the New York Times hiring Sarah Jeong to its editorial board. People looked into her twitter history, and dug up tweets like:

Tribal culture war triggered in 3, 2, 1….  More examples here. If you want the full story see the Vox explainer. Who is good and who is bad in the culture war is not my thing. I don’t care about Sarah Jeong. But I do care about human psychology, and what’s behind tribal culture war. So at a meta level, this is my thing. And one aspect from this go round was particularly striking: how the language of racism has shifted. So that’s the meta story I want to focus on.

Is the newest member of the New York Times editorial board, Sarah Jeong, a racist?

From one perspective — that commonly held by people outside the confines of the political left — she obviously is. A series of tweets from 2013 to 2015 reveal a vicious hatred of an entire group of people based only on their skin color.

But the alternative view — that of today’s political left — is that Jeong definitionally cannot be racist, because she’s both a woman and a racial minority. Racism against whites, in this neo-Marxist view, just “isn’t a thing” — just as misandry literally cannot exist at all. And this is because, in this paradigm, racism has nothing to do with a person’s willingness to pre-judge people by the color of their skin, or to make broad, ugly generalizations about whole groups of people, based on hoary stereotypes. Rather, racism is entirely institutional and systemic, a function of power, and therefore it can only be expressed by the powerful — i.e., primarily white, straight men. For a nonwhite female, like Sarah Jeong, it is simply impossible. In the religion of social constructionism, Jeong, by virtue of being an Asian woman, is one of the elect, incapable of the sin of racism or group prejudice. All she is doing is resisting whiteness and maleness, which indeed require resistance every second of the day.

Yes, we all live on campus now. The neo-Marxist analysis of society, in which we are all mere appendages of various groups of oppressors and oppressed, and in which the oppressed definitionally cannot be at fault, is now the governing philosophy of almost all liberal media.

First a quibble, which I suspect Sullivan would agree with. The left’s definition of structural racism is not that Jeong can’t be racist. Rather that Jeong’s racism, or anyone’s for that matter, can only be against the oppressed. So if Jeong hated black people, she’d be racist. But hating on those in power (white men) can’t be racist. Because racism is about power. Sullivan thinks this new definition of racism is bad. He wants the old definition of racism: judging people by the color of their skin is racist, no matter which skin group has the most power.

With that clarification, what I found surprising was progressive agreement with Sullivan’s thesis.  Here’s Zack Beauchamp:

What makes these quasi-satirical generalizations about “white people” different from actual racism is, yes, the underlying power structure in American society. There is no sense of threat associated with Jeong making a joke about how white people have dog-like opinions. But when white people have said the same about minorities, it has historically been a pretext for violence or justification for exclusionary politics.

To be clear, Beauchamp also says that “white people” is a sort of jokey shorthand slang for the subset of white people who are racist. He has a good analogy with how “men” and “not all men” is used by feminists:

The feminists won this argument; today, feminists still complain about “men,” and “not all men” is mostly used as a punchline rather than a serious argument. But the conservative responses to Jeong boil down, essentially, to the same thing: They’re saying “not all white people” are bad and Jeong is a racist for implying that they are.

My guess is, a few years down the road, we’ll remember the Jeong episode in roughly the same way we remember the #NotAllMen controversy today.

Kevin Drum from Mother Jones had a similar clarification as mine about Sullivan’s intended thesis. But then goes on to say Sullivan’s progressive definition of racism is correct. Quote: “Anybody can be racist. This is so obvious that I hardly feel like wasting words explaining it. However, you can only really be racist toward nonwhites.¹ Within limits, you can say just about anything you want about whites—and especially white men—and it’s not racist. It’s just mockery of the ruling elite, the second-oldest pastime of the human race.”

Normally in culture war both sides claim the outgroup is evil, has bad motives, and twists the meaning of the ingroup’s words. In this case, both sides claim the outgroup is evil and has bad motives. Check and check. But they surprisingly agree 100% on the words. This dispute is about which definition of racism is correct. Conservatives want the old, let’s call is circa 1964, definition of racism. Progressives want the new definition, believing (correctly in my view) the progressive definition of racism is already a fait accompli. Agreeing on what we’re arguing about is progress, at least of a sort.

2. Computer productivity is not mismeasured. There’s a widely held belief in the technology world that productivity gains from computers are not fully captured, and this explains why standard measures of productivity growth have declined. Greg Ip reports on a new study from Brent Moulton claiming the computer productivity measurement problem is not large. Example paragraph:

Mr. Moulton estimates the shift from shopping in brick-and-mortar stores to online has driven prices down—the so-called Amazon effect—by more than the official data capture. But he estimates this effect is smaller than when consumers shifted to big box and warehouse stores decades ago, which similarly wasn’t captured in the data.

To be clear, I believe the mismeasurement issue is real. But the way I like to think about is through the lens of child mortality, in particular the impact of vaccines, over the last 100 years. I just did a quick search from Max Roser’s excellent Our World in Data website, which has lots of econ data from world history. Here’s a chart on child mortality: 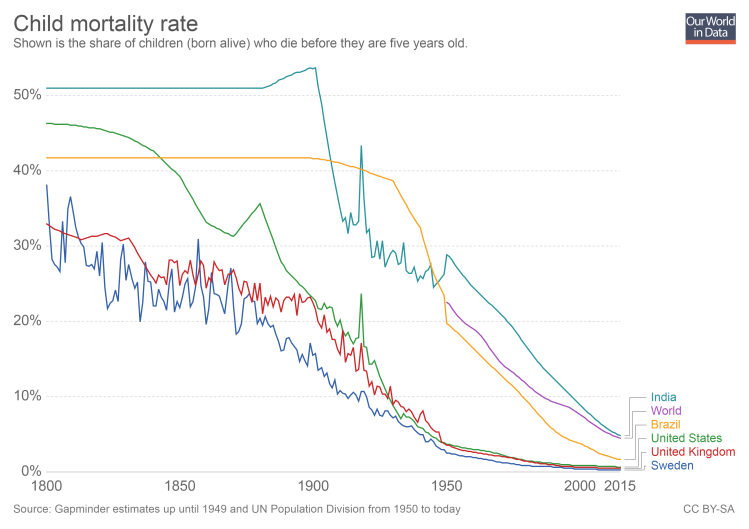 You can see in the US, 40% of kids died before reaching age 5 until around 1900. By 1990 it was 1%. Vaccines are a large part of that story. Vaccines are pretty cheap. Here’s the thing. The econ productivity metrics went up because fewer children died, with only small costs incurred. But the emotional gain in going from child death being commonplace throughout world history and prehistory, to suddenly being extremely rare is not captured. Mismeasurement.

The larger point here is econ productivity stats have always greatly mismeasured societal gains. So if you want to argue measured computer/internet econ productivity gains don’t completely capture benefits, I’m 100% on board. But you have to go beyond that, and claim today’s mismeasurement problems are worse than those in the past. And the canonical example for me is child mortality. So you must argue that smartphones make you happier and better off than avoiding half your kids dying before age 5. A far harder sell.

There’s a distinction within the YIMBY cause that’s mostly unspoken, but it’s important. Two of the key goals the movement aims to address are (1) to lower housing prices and (2) to unlock economic, cultural, and social potential. These are often described in similar ways and are in many cases complementary, but they are not the same.
On one hand, there’s a lot of talk about how building more will decrease prices because of the models of basic supply and demand curves from Econ 101. We’ll call this goal the affordability objective: let’s make housing affordable in key metro areas, both for residents who are already there and for those who’d like to come. Another related but different goal is about how much is lost as a result of locking people out of opportunities in the most productive regions. We’ll call this the opportunity objective: let’s make it possible for people to to participate in the economic and cultural dynamism in places that they’re locked out of right now.

This is a useful distinction. In particular, it’s possible that building more housing will just attract more people. Think of the San Francisco Bay Area, where I live. It’s great! More people should live here. But if it’s so great, maybe the affordability objective is hard to meet, as people move into the area as quickly as more housing gets built. Anyway. I thought this was a useful and important distinction. I’m YIMBY, but mostly for opportunity objective reasons. It would be good for our country if people who lacked opportunity could afford to move to where the economy is booming. It would be good economically and culturally, probably politically as well. I think the affordability objective is also likely to be met if we built more, but perhaps we should be careful in hard selling that angle.

4. Island Dwarfism. Carl Zimmer has a nice piece in the New York Times. Subtitle is The Indonesian island of Flores has given rise to smaller hominins, humans and even elephants. Couple of quotes: “When there is selection on stature, the response is driven by variants in many genes, not just a single gene.” And: “One leading hypothesis for the evolution of the pygmy body type is a shortage of food. A smaller body demands fewer calories and may offer a survival advantage.”

5. Making houses fireproof is more effective than fighting wildfires. With the Carr fire in California still burning hot (see this map), this is a timely 99% Invisible Podcast on Jack Cohen’s work. Quote:

In other words, if structures near fire-prone areas were designed and maintained to withstand fire, we might not need to fight some wildfires at all. If the only goal was to save houses, that ruled out fighting a lot of forest fires.

Cohen thought he had come up with a way to save houses and to let fires burn naturally — he thought it was a win-win. And so in 1999, he presented a paper about his findings at a fire conference in front of people from the Forest Service and state fire agencies. These were people who were in a position to change policies. But Cohen says they were totally uninterested. Cohen’s research implied that basically everything about how the Forest Service dealt with wildfires was wrong.

The 99% Invisible podcast is very well done. Recommended. Or if you want to read it instead of listen, their transcript is also excellent, with plenty of visuals. link

And that’s all for this week.