1. Twilight of the Luigi Luca Cavalli-Sforza era. Cavalli-Sforza died on August 31. He helped create many of the modern techniques of population genetics, and his life’s work was an attempt to fit all of humanity into a single family tree. If you’re interested in an overview of his career, see this excellent post by John Hawks The man who tried to catalog humanity. So rather than an overview, I want to narrowly comment on a debate that spanned Cavalli-Sforza’s career, but now is drawing to a close.

Richard Lewontin’s highly influential paper from 1972 noted that 85% of the genetic variation of humans was within populations, and only 15% was between populations. Therefore: “racial classification is now seen to be of virtually no genetic or taxonomic significance either, no justification can be offered for its continuance.” The Lewontin argument against the biological concept of race immediately became the gold standard for discussing the subject. And has remained so ever since.

In 2000, A.W.F. Edwards pointed out that while no single gene can classify any human, the genome is large enough that correlations among genes can be used to classify populations. And of course that’s exactly how Ancestry.com, 23andme, and all the other new DNA ancestry companies work. Razib Kahn did an interview with Cavalli-Sforza a while back, and asked him where he stood on this. That’s of interest because Cavalli-Sforza is someone both sides tended to claim as their own. Cavalli-Sforza answered:

Edwards and Lewontin are both right. Lewontin said that the between populations fraction of variance is very small in humans, and this is true, as it should be on the basis of present knowledge from archeology and genetics alike, that the human species is very young. It has in fact been shown later that it is one of the smallest among mammals. Lewontin probably hoped, for political reasons, that it is TRIVIALLY small, and he has never shown to my knowledge any interest for evolutionary trees, at least of humans, so he did not care about their reconstruction. In essence, Edwards has objected that it is NOT trivially small, because it is enough for reconstructing the tree of human evolution, as we did, and he is obviously right.

The reason Lewontin’s argument stood the test of time is because humans as a species really are closely related. And it’s reasonable to conclude those differences don’t matter. But that’s an argument subject to empirical scrutiny, albeit impossible to test until very recently. Now with the advent of whole genome sequencing and modern statistical techniques, we’ve entered the era of polygenic scores. These polygenic predictors score an individual’s genome against a trait of interest. For example, here’s a new paper using genomes to predict human height to within an inch.

What’s happening is the Lewontin framing is still holding for the moment, we’re in the dimming twilight of that era. The debate Cavalli-Sforza’s career successfully straddled has become empirically testable. No doubt the answers we discover will be far more complicated than were dreamt of in our philosophical youth, when we didn’t have actual data to grapple with.

2. Comparison of text editing methods. Interesting comparison of which way of creating text is fastest. Link. Here’s on bit:

Speaking wins by a large margin at a whopping 184 wpm. Typing is in second place at 40 wpm for the average typist. (I’m quite a bit faster—83 wpm—but I doubt you care about my specific stats. To measure your own wpm: livechatinc.com/typing-speed-test.) Handwriting is roughly 13 wpm, just 1/3 the speed of average typing, 1/6 my typing speed, and 1/14 the speed of speaking.

3. Controlling for genetics in clinical trials. HDL cholesterol is the good kind. It is associated with good heart health. But it’s not clear if being healthy causes you to produce more HDL, or if putting extra HDL in your body makes your heart healthier. So to find out, pharma companies spent a lot of money creating drugs to elevate the level of HDL. Unfortunately those drugs were a flop. Now a new approach is to identify genes which elevate HDL cholesterol, and then see if having those genes help your heart. It’s a way to test the hypothesis without doing a drug trial. And it turns out, they do not! So pharma companies could have avoided the HDL fiasco if they had had genomic analysis to test the hypothesis out of the gate. link

4. Saved you a click stories. Here’s stories which have a couple of sentences of interest, but aren’t worth reading in full. But click through if one strikes your fancy.

5. Some excellent charts. Let me finish this week’s post by showing some charts. Click through to read associated article. 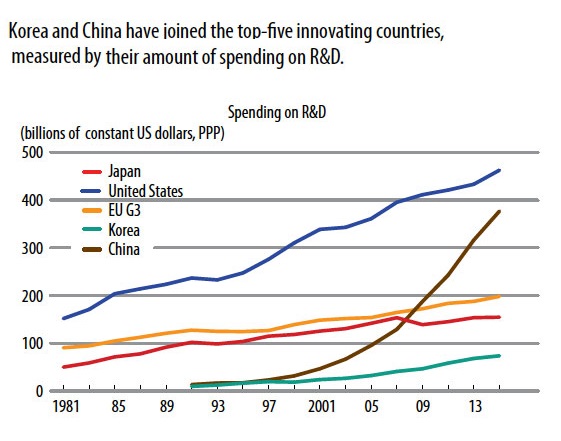 image source: China and Korea Crash the Party in the Global Knowledge Economy

And that’s all for this week. Thank you for reading.