The theme for the first day of the Republican convention was “We Built It.” What struck me was not that the Republicans twisted an Obama quote to make a tag line. Rather it was how some people found the focus on that line simply incomprehensible. And yet that incomprehension has a story to tell. In particular Jonathan Haidt’s excellent new book The Righteous Mind provides a great frame for understanding how partisan incomprehension works.

If you were successful, somebody along the line gave you some help. There was a great teacher somewhere in your life. Somebody helped to create this unbelievable American system that we have that allowed you to thrive. Somebody invested in roads and bridges. If you’ve got a business — you didn’t build that. Somebody else made that happen. The Internet didn’t get invented on its own. Government research created the Internet so that all the companies could make money off the Internet.

The reason this out of context line resonated for Republicans is blatantly obvious. It caricatures liberals as people who believe the government is the primary actor in America. That is, Democrats are socialists trying to pretend otherwise. And the line has plenty of precedence, such as Bob Dole at the 1996 Republican saying ”… with all due respect, I am here to tell you, it does not take a village to raise a child. It takes a family to raise a child.” So exactly 16 years ago at the Republican convention we had a nearly identical attack which caricatured liberals in a similar fashion. Only the prop changed. Back then it was Hilary Clinton’s children’s book “It Takes A Village”.

So a reasonable analysis of this is pretty easy. For example here’s an article which explains that

I wish Romney’s team would use the full version. Because even in its full glory, it would inspire largely the same reaction.  The sentiment resonates with small-business owners—and it’s small-business owners who have been most vocal in their response to Obama’s comments, from the co-owner of an Iowa deli who good-naturedly catered an Obama campaign stop in a T-shirt saying, “Government didn’t build my business” to the hardware store owner who was a bit less gracious.

Conservatives suspect that President Obama sees government as the solution to everything.

That last sentence is key. Partisans caricature their opponents, so the twisted quote merely exaggerates what the full quote directly says. And the full quote even in context is something partisan republicans find offensive.

In short, it was dishonest to take the quote out of context and Republicans should be called to account for lying. But with that said, the underlying message  caricaturing Democrats as socialists is easy to understand. And it’s obvious why it resonates with Repulicans.

With that background, here’s a reaction from Krugman:

I really don’t think there’s been anything like this in American political history: a presidential campaign, with a pretty good chance of winning, that is based entirely on cynical lies about what the sitting president has said. No, Obama hasn’t apologized for America; no, he hasn’t denigrated achievement. Yet take away those claims, and there’s nothing left in Romney’s rhetoric.

Now Krugman is and has been fed up with Republicans. But the point here is not that he thinks they are idiots. That’s a given. The point is he didn’t pick up the context. Partisans caricaturize their opponents.  What Republicans are saying (in exaggerated fashion) with this out of context quote is true and almost trite. Democrats clearly aren’t socialists, but they really do believe in more government action than Republicans. And that’s all the rhetoric is about. It is not unprecedented in American political history (you may recall the Civil War), and there really is something left, namely the longstanding ideological disagreement between the two political parties. Now obviously Krugman is brilliant, and he understands this on some level. But the point here is that because Krugman has such a low opinion of Repulicans he has trouble emphasizing enough to understand what Republicans mean when they talk to each other. And of course Krugman is more sensible than most partisan liberals on this topic, which is why I picked him out.

Here’s where the Jonathan Haidt frame comes in. While doing some searches on Haidt, I found a great Krugram quote via Conn Carroll where Krugman says

A liberal can talk coherently about what the conservative view is because people like me actually do listen. We don’t think it’s right, but we pay enough attention to see what the other person is trying to get at. The reverse is not true. … The other side has dogmatic views.

Morality binds and blinds. It binds us into ideological teams that fight each other as though the fate of the world depended on our side winning each battle. It blinds us to the fact that each team is composed of good people who have something important to say.

This book explained why people are divided by politics and religion. The answer is not, as Manichaeans would have it (i.e., battleground of forces of light and of darkness), because some people are good and others are evil. Instead, the explanation is that our minds were designed for groupish righteousness. We are deeply intuitive creatures whose gut feelings drive our strategic reasoning. This makes it difficult – but not impossible – to connect with those who live in other matrices, which are often built on different configurations of the available moral foundations.

Now this is an old insight. Partisan groups can’t understand each other. What is new from Haidt is he surveys people to see where they sit on 5 moral axis. He calls this moral foundation theory. So if you are sensitive to sanctity, loyalty and authority, you are likelier to be a conservative. On the other hand, if you are sensitive to harm and fairness and a tad oblivious to sanctity, loyalty and authority then you will tend liberal. The right way to view this is like other personality traits such as introvert/extrovert. Each disposition will tend toward it’s own virtues and temptations, as well as it’s own insights.

What was fascinating was when Haidt asked respondents in surveys to mimic each other. The paper is on line, though the book is a better and covers more ground. It turns out that liberals, especially very liberal people, have trouble predicting and responding as if they were conservative. But the opposite is not true. Haidt’s explanation for this asymmetry is that while conservatives hold moderately strong beliefs in all 5 of the moral foundations, liberals are very strongly drawn to just 2. As such, it is harder to mimic other’s beliefs. It’s almost like asking someone who can’t taste sugar to predict whether muffins or cupcakes will taste sweeter. They can’t do it.

Anyway, I guess this has turned into a plug for Haidt’s book, which is worth reading. It definitely provides an interesting frame for the partisan world we live in now.

Let me leave you with a quote from a nice article I found via Haidt where Michael Rubens, who produced episodes for the Daily Show with Jon Stewart, talks about how it feels to discover the people you completely disagree with aren’t motivated by evil after all.

What I’m hoping the lesson is: People are complex and can hold different views and still be moral actors — essentially the message that Jon Stewart talked about during his Rally for Sanity. Maybe you already grasp that concept, because you have good friends or loving relatives with beliefs that are wildly divergent from your own. But I tend to think my experience is more typical: I lived in a little bubble surrounded by people who think more or less like me. And when I considered people with opposing viewpoints I would turn into a fabulist, concocting an entire narrative of who they were and what they were like — and what they were like was yucko. Because I was not really interacting with them. I just thought I was, because, hey, look, there they are on the TV, or there’s that guy’s post in the comments section. But that stuff doesn’t count. Meeting people counts. Talking counts.

So yes, I love to loathe people, but my “Daily Show” experience complicated all that and sort of spoiled my fun. When I’m exposed to views that I dislike, I try to remind myself of the human being behind those views and to cut that person some slack. I hope that they would do the same. I think we should all fight hard for what we believe in, but I’d like to put in a request for some general slack cutting – especially as we move deeper into what is sure to be a very heated campaign season. 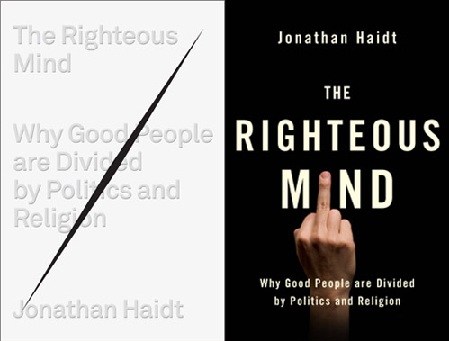