The press has been enjoying the Apple maps kerfuffle since Apple replaced Google maps on iOS6 a few weeks ago on Sep 19. Especially with Tim Cook apologizing. But on this one I’m more in line with fanboys like MG Siegler and John Gruber, who understand how maps fits into a bigger picture. The maps kerfuffle will fade to nothing inside a year, like the iPhone 4 antenna kerfuffle faded while Steve Jobs was still around. In fact the maps roll out shows Apple has it’s head on straight strategically, even if it’s a short term screw up. The first reaction from the press is the opposite, saying it’s a sign of long term decline. Plus they get to recycle stories about Apple’s failure without Steve Jobs. Since this kerfuffle fits in nicely with my recent post on the rise of the touchscreen interface, let’s walk through it.

Maps as part of the Apple-Google Ecosystem Battle

Most people understand that Apple and Google Android are the only important players left battling it out in the smartphone market. What’s less well understood is the battle is no longer about the devices themselves but about the ecosystems, as I said in my touchscreen post. The devices are already stable, so the changes between the iPhone 4 and 5 are analogous to the ones between the Honda Accord 2011 and 2012. Not much. Nor should there be. The innovation battle has moved instead to all the new apps and services being written in the two ecosystems.

And this is where maps fits in. The most innovative sector in mobile is location based services. Apps like facebook, photos, driving GPS, shopping, payments with square, yelp, flights, traffic, all rely on location. And before Apple produced their own maps, all this location data was going to Google, which made Android better at the expense of Apple. In fact, over half of Google maps mobile usage came from the iPhone. Over half! And Google was playing hardball with Apple, releasing an inferior iPhone mapping product compared to Android, lacking turn-by-turn directions and vector based graphics. So Apple could either continue down their current path of becoming more and more captive to Google, or swap out Google maps with their own platform. As John Grouber pointed out, due to contract timing, Apple had to switch maps with iOS 6 or wait at least one more year.

So Apple took the long term win, knowing their data would inferior to start with. The maps decision shows good leadership at Apple, the opposite of the press’s take on the story, even though short term they botched it. This means David Pogue of the New York Times is going overboard, though he has a point, when he says ”Maps is an appalling first release. It may be the most embarrassing, least usable piece of software Apple has ever unleashed.” It’s good Apple apologized. But with the flood of data coming into Apple, and that same flood of data suddenly cut off from Google, there’s no reason to think this won’t turn around and be forgotten in a year. A good analogy is Siri voice, which had the same data driven chicken and egg problem, where it couldn’t improve until after it was launched and data was flowing into the algorithms. And the bar for Apple success is not to match the data quality of Google maps, which they’ll never do, but merely to do as well as for example AOL Mapquest (remember AOL?), which Apple has offered as a short term solution. Most normal users don’t pay attention to this stuff. They just use whatever the default is. So they’ll hardly notice the change, except that suddenly they’ll have turn-by-turn directions on their default map application. A step up from before. Google will have to respond by making a much better iPhone map app than their artificially bad old one, which they will hate to do even while being forced into it. When that happens they’ll spin it to say it’s a sign of Google strength, not a reaction to being cut off from over half of their incoming mobile location data.

In fact maps was one of the last weak points in the Apple ecosystem, so long term this puts Apple in an even stronger position. App developers currently make 6x as much money on Apple devices as on Android, and that is unlikely to change in the next few years as the Android problems are structural. Developers develop apps first for iOS, and second for Android or not at all. And Siri is also poised for more strategic wins as I discussed in my last post on voice interaction.

Apple doesn’t need a genius to ride their current wave

One way to think of this is like big wave surfing. It takes a real genius like Steve Jobs to invent and catch a big wave, in this case the touchscreen smartphone market. But Jobs is no longer needed at Apple for it to be a juggernaut. Any semi-competent weekend warrior (or MBA) can ride a big wave once up on it, as long as they avoid anything fancy. So when Apple got pushed out of position by maps, they flailed but made the cutback they needed to make. In fact by now (Sep 20120) it would take some type of Lex Luthor scenario for Apple to lose their lock on the top 25% of the smartphone market. The burden of proof is on Apple haters to tell a plausible story where existing trends radically change. But there aren’t many Lex Luthor evil genius candidates waiting off stage. With existing trends the smartphone market will double in two years (chart below), so Apple’s size should double along with it. This would give them a 1 trillion market cap in late 2014 or early 2015, even if their P/E ratio stays low at 15. Long term, Moore’s law will push nearly all 7 billion people on the planet to have touchscreen smartphones. And while Apple’s market share is likely to decline from 25%, that still means it’s reasonable to expect 1 billion people will own Apple phones before the wave subsides. Even though that’s not evident to everyone right now. 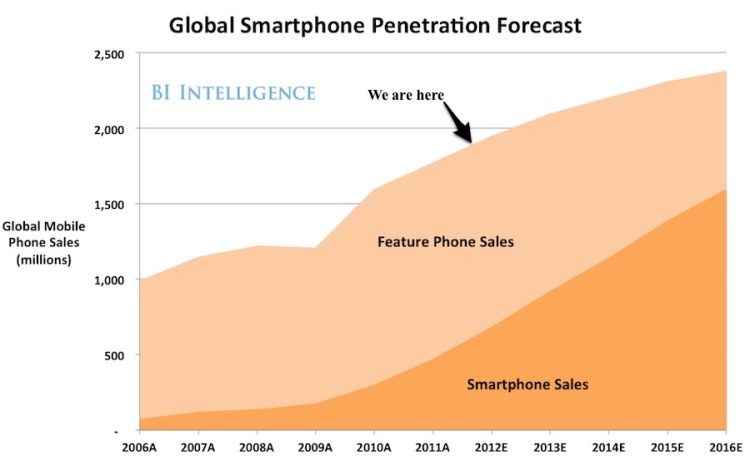