Biologists consider bees to be superorganisms, where the social bonding of individual bees is so tight they exhibit behavior at the hive level. A common analogy is bees are to hives what cells are to a bee. Or to extend further, as neuron cells are to a human brain. Now the coordination of cells in an organism is far tighter than bees in a hive. But that difference is helpful. With bees we can actually see what’s going on. Let’s look at how bees decide where to build a nest, and see what that might mean for how the brain works.

Start with this paper Group decision making in nest-site selection by honey bees. Bees select a new nesting site by having scout bees go out in random directions. When a scout bee finds a candidate nest site, it comes back to the hive and does a waggle dance encoding where the site is. If you’ve never seen a waggle dance, take a moment to watch this 50 second video. What’s key is the duration of the dance indicates how good the potential site is. At first, scouts come back and waggle dance in conflicting directions based on whatever candidate sites they’ve found. Shortly after dancing, bees forget what they’ve done. Then they either go out searching again, or if they’ve stumbled across another dancing bee they’ll check out the other bee’s site. Over time, since longer dances recruit more scouts, the best site starts to win out. Eventually all the scouts dance in the same direction. Once that happens a few hours in a row, the hive “decides”, and swarms to the new nesting site.

The diagram below from the paper might help. Each box is several hours of time. Within each box the width and size of the black lines indicate the number of scout bees dancing for particular sites. By the end they’re all waggle dancing together in agreement. 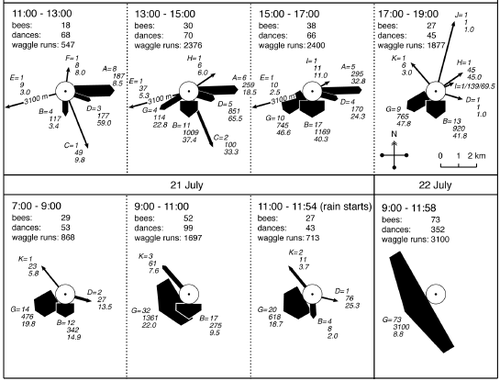 What’s interesting is the individual scout bees don’t “understand” what’s going on in any way. Neither does the hive. The decision on where to build the new nest is emergent at the hive level, based on very simple individual bee behaviors.

What does the bee analogy teach us? First, there’s no “mind” hidden in a secret spot inside our brains. That’s the homunculus fallacy. It gives you infinite regress, with turtles all the way down. Just as each bee doesn’t understand, so each neuron doesn’t understand. Mind is an emergent property of neurons working together.

Second, we shouldn’t expect our brain to understand it’s own internal logic. Just as the hive has no idea why it does what it does, people have no idea either. Evolution cares about behavior. So human beings have behaviors which work in practice. But if I honestly ask myself why I choose to do something, the answer is not clear at all.

Where this gets interesting is humans are highly social animals, though obviously not to the extent of being suprerorganisms like bees. And unlike bees our social groups are composed of large brained individuals. As such, we’ve evolved a capability to predict other people’s actions. We need this capability to decide if people are friend or foe. Philosophers call this having a theory of mind. And to some limited extent, our evolved theory of mind allows us to self-reflect on why we do things. But don’t push it too far. The evolutionary purpose is to predict other’s behavior to drive our own, not to understand what’s going on inside our heads.

I’ve posted about consciousness before, and to recap am partial to the Jeff Hawkins view that brains work by continually predicting what’s going to happen next. And furthermore predicting how our actions might influence what happens next. What the bees tell us is the brain’s predictive capability is emergent from the interaction of the neurons, and unintelligible to the brain’s owner. In fact the more you reflect on how individually dumb bees dancing around can lead to astute trade-offs on where to build a hive, the spookier but cooler our brains appear to be.