The Anthropocene is a proposed epoch to add to the Geologic Time Scale (GTS), marking the start of human dominance of Earth’s climate and ecology. Our current Holocene epoch started 11,700 years ago and runs to present. At this point it seems likely the International Commission on Stratigraphy, which decides such things, will approve the Anthropocene epoch. But picking the start date has led to debate. The likely winner is roughly 1800, tied to the start of the industrial revolution and it’s steep rise in greenhouse gases. But William Ruddiman advocates an “Early Anthropocene”, starting around 8000 years ago when agriculture got started. For what it’s worth, I’m in the super early camp, and would argue the entire Holocene itself (from 11,700 years ago) should just be lumped in with the Anthropocene. Us humans have been wreaking havoc for a long, long time.

Why so early? From wikipedia: “Different spans of time on the GTS are usually delimited by changes in the composition of strata which correspond to them, indicating major geological or paleontological events, such as mass extinctions.” That is, the primary method used to delineate geologic time spans are changes in the rock layers, paying particular attention fossil changes and mass extinctions.

Now the proponents of the Anthropocene tend to focus more on atmospheric changes than biodiversity changes, though they obviously pay attention to both. That’s because the term Anthropocene “was coined recently by ecologist Eugene F. Stoermer and has been widely popularized by the Nobel Prize-winning atmospheric chemist, Paul Crutzen, who regards the influence of human behavior on the Earth’s atmosphere in recent centuries as so significant as to constitute a new geological epoch for its lithosphere.” Paul Crutzen is best known for research on ozone depletion. This is typical. The strongest advocates for the Anthropocene to be climate scientists, leading them naturally to pick the industrial revolution as the start date.

Let’s look at some key dates which could be used to start the Anthropocene:

Like many evolutionary and geographic changes, these things happened gradually over a very long period of time. So picking a start date to the Anthropocene is inevitably a bit arbitrary. So I’m fine with the 1800 industrial revolution likely start date. But if I were to pick, it would be tied to the megafauna mass extinctions, which really peaked at the start of the Holocene 11,700 years ago. It’s such a shame those magnificent animals went extinct just before the start of the historical record. We could honor their passing by starting the Anthropocene when they all died. 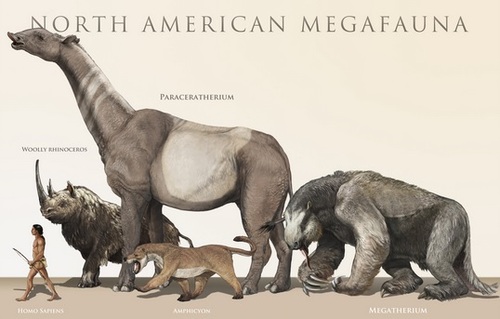