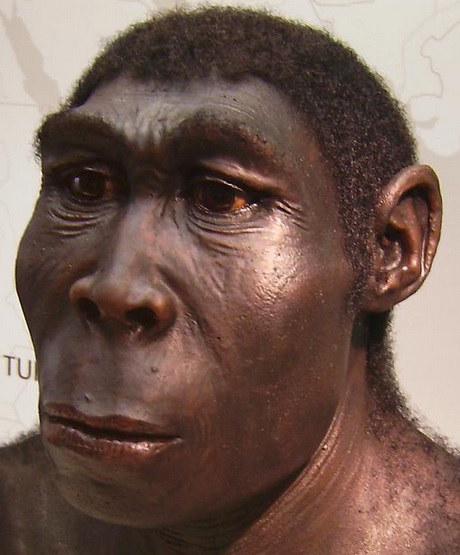 Ancient Greeks believed ”whoever is not Greek is a barbarian.” Viewing other groups as subhuman is as old as humankind. In fact one way to measure historical progress is to note the expanding definition of what it means to be human, including more races, genders, cultures. Today we include every human on the planet. But let’s take this down another axis, into our evolutionary past. If we could magically resurrect our evolutionary forebears, how far back could we go before we’d have to admit these are apes, not people? It’s a thought experiment. Arguably we could call Homo Erectus close to modern, even though it’s one of the first in the genus homo.

First, let’s set some criteria of what “close to modern” means. For this argument, let’s require behavior that would allow living in a modern society. Maybe not quite able to hold down a job, but having basic language skills and able to muddle through, perhaps with a bit of help. This also means sufficient social control to not be a danger to others. Apes are dangerous. And of course able to have kids with moderns. Can’t leave that out.

Let’s start with kids. One of the most surprising and interesting findings coming from genomic studies has been sequencing the DNA of extinct Neanderthals and Denisovans, and finding they interbred with modern humans. The rule of thumb for mammals is species separated by a few million years can interbreed. For example lions and tigers can interbreed despite having diverged 7 million years ago. Given that Homo Erectus is 1-2 million years away from moderns, plus recent evidence of interbreeding with other archaic humans, it’s now plausible to assume Erectus could have kids with modern humans.

Next, fire. Erectus had it at least 1 million years ago. Predecessors did not. E. O. Wilson makes fire a central aspect of what makes us human from a behavior point of view. Gathering around the campfire gave us a nest, which pushes up our levels of cooperation. I’m sympathetic, though Wilson’s been widely criticized for going overboard on the fire thing. Nonetheless, fire is a huge deal. We are so adapted to cooked food that we will die without it. Cooked food has far more absorbable energy, which allowed brain expansion.

Ruling the planet. Erectus was the very first hominin to move out of Africa, as in the map below. Between fire, hunting with fire, and population expansion, Home Erectus were the first hominans with a global impact on the environment and wildlife as discussed in last week’s post on the Anthropocene.

Behavior and language. This gets to the crux of the matter. Did Erectus speak and have language? Thirty years ago the answer would clearly have been no way. After all, definitive proof of modern behavior is only 50k years old, even though the modern human species is at least 200k years old. So old school thinking is language and modern behavior are also 50k years old, when a mass wave of modern humans burst out and swept the planet clean of all other archaic humans. Here’s a more recent take:

It is usually assumed that modern language is a recent phenomenon, coinciding with the emergence of modern humans themselves. Many assume as well that this is the result of a single, sudden mutation giving rise to the full “modern package.” However, we argue here that recognizably modern language is likely an ancient feature of our genus pre-dating at least the common ancestor of modern humans and Neandertals about half a million years ago.

They go on to discuss changes in the hyoid bone, and other morphological changes pointing to a capacity for modern speech. The concluding sentence is:

Interestingly, all these changes occurred in the transition from Homo erectus to Homo heidelbergensis, the common ancestor to both Neandertals and modern humans. We suggest therefore that this common ancestor was an articulate mammal.

Now Homo heidelbergensis dates to 1.3 milion years ago, so to be fair one could argue that if Erectus couldn’t speak we wouldn’t consider them our candidate. We’d have to take Heidelbergensis as the oldest in our lineage that could muddle through in the modern world. A reasonable position. But there are also arguments that modern prosocial behavior came first. In this model, language and proto-speech became adaptations long before the modern vocal apparatus evolved to support it. The behavior induced the selection. How could people speak? By smacking their lips using click languages. Of course this is speculative, but hey, just trying to see how far back one could argue. It’s fair to concede Heidelbergensis if you require spoken language. Also note that I’ve deliberately avoided discussing brain size, which is clearly larger in modern humans. That’s because (in my view) it’s really language and behavior that would allow fitting in with the modern world. Social intelligence if you will.

The larger point here is science continues to narrow the gap between us and all other life. Both across the animal kingdom and into the deep past. Modern humans had conversations and children with Neandertals. Going back a million years to Heidelbergensis, it’s plausible to think we could hang out together. Erectus and two million years ago is even a possibility using click or sign language. People have been running around the planet for a long, long time.