Last week’s post discussed why Microsoft built their Windows 8 hybrid interface, combining a touch screen and mouse/keyboard in a single device. The reason had to do with how Microsoft is situated on the Innovation-Monopoly axis above. They tried to extend their Windows desktop monopoly to tablets. Investors want a sure thing. They lust after monopoly, believing innovation is a false god. Why? Because products can be copied. A monopoly is forever. I like this framework, so let’s take it a bit further.

It’s almost a cliche that startups pitch themselves to investors as being on the left, yet able to jump to the right. Where they’ll get rich. Startups talk about network externalities, social lock in, going viral, economies of scale, first mover advantage, barriers to entry, etc. What it boils down to is once established, competitors won’t be able to copy them and compete away all the profits. From the inside of course, companies attempt to simultaneously innovate and exploit their markets indefinitely. That happens for a while. But at some point there will be a crisis, and leadership will be forced to choose. Subjectively we can place companies along the Innovation-Monopoly axis by asking how they would handle a true crisis. Apple on the left. Microsoft on the right. In fact it’s entirely natural for companies to be born on the left, and drift rightward. Apple is unusual precisely because they try so hard to stay left, which is why investors hate them.

Consider this quote about Microsoft’s Windows monopoly and how it was seen as the key business model:

Ten years ago, everybody in the tech industry — and I mean everybody — was convinced that the best way to dominate a technology market was to create an operating system and license it to a bunch of other companies…..

Ten years later, the idea of an independent operating system licensed to all comers is a fading ideal.

Why the change? Since then we’ve learned there’s more than one way to exploit a monopoly in software. Getting an exploitive monopoly is valid across time and markets. Having a stranglehold on an OS was just one particular tactic. As usual, Ben Thompson has a great framework. Start with his picture below: 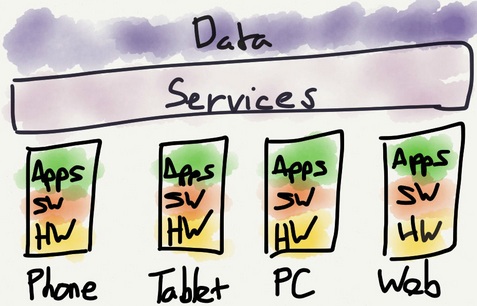 As Thompson points out:

For Google, Android was a detour from their focus on owning and dominating web services; it ensured that those services would be freely accessible in this new world of computing, including on the iPhones and iPads that were used liberally in nearly every keynote demo. And, now that Android is successful, Google is back to focusing on “the best of Google”

The sheer brilliance of Google’s move into Android is hard to overstate. Business schools will study it’s meteoric rise for decades. The $12B write down for buying Motorola Mobility was not a failure. It was an insurance policy, showing how far Google was willing to go. Android’s success should be compared to Linux, which in contrast utterly failed to overtake Windows on the desktop. By giving away Android for free very early in the smartphone game, Google not only destroyed Microsoft’s OS business model for phones/tablets. They destroyed the conventional wisdom behind it. In fact they are destroying (or attempting to destroy) Apple’s hardware model as well. Google would be fine if all phones were free, selling services and ads at thin margins. Apple makes premium products. That model is working for Macs, and should continue to work for the foreseeable future. But with phones the primary differentiator has moved beyond hardware and OS to services, like maps and search and voice interaction. Google is fiercely aligned to services because that’s their primary business model, and they can design for all platforms. As a hardware vendor, Apple’s services are corporately constrained in scope and ambition to only Apple. This strategy tax undermines their attempts to do what their corporate culture drives them to do, lock the premium end of the market. Steve Job’s failure with Mobile Me was a warning of things to come.

So where does Google sit on the Innovation-Monopoly axis? I would place them as below.

Google is doing well at both Innovation and Monopoly for the moment. Amazing. But the real question is which side Google would pick in a crisis. It’s a small story that got little press, but I think Google repeatedly blocking Microsoft’s YouTube app is a tell that Google belongs slightly on the right. Microsoft is not a real threat in the phone/tablet operating system space anymore, and Google’s stated goal for YouTube is availability on all platforms. It’s even on Blackberry. Repeatedly blocking Microsoft’s YouTube app on Windows Phone shows their willingness to use monopoly power to slight to a rival. But we have yet to really see.

Finally, Amazon is interesting because Jeff Bezos positions them using a classic startup pitch, being on the far left but able to jump right any time. Amazon only has to ”throw the switch” to earn monopoly profits.  But there is no “switch” to throw. The proper comparison for Amazon is Sears during their 1890-1970 heyday. Barriers to entry for web retail are no different than mail order catalogs. It’s an update to a very old kind of business. Like circa 1890 Sears before it, Amazon has decades and decades of success ahead with huge economies of scale. A great and very innovative company. But one running indefinitely on razor thin margins. Given the stock market’s lust for monopoly and hatred of innovation, look for Amazon’s investors to be miffed once they catch on.