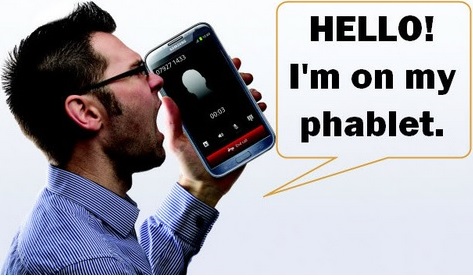 Giant phones, “phablets” with 5-6 inch screens, seemed pretty crazy to me at first. But phablets are becoming increasingly popular, especially in less developed countries. What’s even more interesting is that phablets may become free.

Let’s take these one by one. Start with Steve Job’s classic 2010 analogy that iPads are cars, PCs are trucks:

When we were an agrarian nation, all cars were trucks because that’s what you needed on the farms. Cars became more popular as cities rose, and things like power steering and automatic transmission became popular.
PCs are going to be like trucks. They are still going to be around…they are going to be one out of x people.

And that’s exactly where things are headed. It’s one thing if you can afford the computer trifecta: a phone (commuter car), a tablet (family sedan) and a laptop (big ol’ truck). But for most people, the phone is the only computer they’ll ever own. As such it makes sense choosing the biggest screen you can tolerate lugging around day and night. Not surprisingly phablet growth is most rapid in Asia.

Second point. Services are becoming the differentiator for phones, not hardware. By services, we mean search, maps, location based information, streaming media, and more importantly voice interaction. In the early days of PCs, say 1985-1995, it was worthwhile to buy a new system every year or two. But by roughly 2005 this no longer made sense. PC hardware got “good enough” for most usage. Similarly smart phones started out with huge annual leaps in performance. But by now it’s leveling off. The change between an iPhone 4 and iPhone 5 is far less and than between an iPhone 3 and iPhone 4. Once the hardware stabilizes, services are the key.

With that said, there’s clearly room for premium phones with awesome hardware. The world is a big place. BMW (think Apple) sells a lot of cars. Though not as many as Toyota.

Finally, services and apps moving to the freemium model. We see this in games already, where paid app games are going out of style. Instead we have free games with in-app purchases now generating 3/4 of all game revenue and growing. And in truth, for most services like search, maps and media we’re already there. Free with ads. And you can pay extra for bonus features.

How this is coming together is with phone companies like Xiaomi, who sell phones at cost to lock in revenue from services. As they explain:

Meanwhile the Mi3 device, which was unveiled earlier this month, compares favorably with other high-end handsets, he said, but again with a significantly lower price tag. It sells for around $330, compared with $864 for the iPhone 5S in the mainland.

“How can Xiaomi offer such strong specs at such attractive prices? The strategy is to sell high-end smartphones at or slightly above bill of materials costs and monetize the user base through software and services,” he said.

The closest analogy here is probably Amazon’s model of selling Kindles at cost to lock in future purchases. As hardware becomes cheaper and more stable, and as services companies get better at leveraging the freemium model, low end smartphones could become “free”. To be clear, we’re not talking free with 2 year contract like in the US, where carriers subsidize the true price. In most of Asia you pay list price for phones. So we’re talking free as in Xiaomi giving it away without a contract free. Though it’s understood these free phones would be restricted to running their vendor’s services and full of ads. Obviously you’d pay for a higher end phone if you had the money. Nonetheless, free phablets could be a huge part of the global market in 5-10 years. The future looks phabulous.