Soylent started in 2013 as a Rob Rhinehart crowdfunded experiment in food replacement. The name and food replacement angle attracted lots of enthusiasm, for example see what happened when I ate only Soylent for 30 days. Answer: farts. Evil ones. With the 2.0 version coming out in Sep 2015 as a prepackaged drink, I bought some to try it out. On my Friday commute I often listen to Ben Thompson and James Allworth’s Exponent podcast, and their latest episode covered disruption in the internet age. Drinking Soylent while listening, the two seemed (somewhat) related. Let me explain, finishing with my Soylent review.

The backdrop here is Clayton Christensen’s theory of disruptive innovation, which for example clarifies how PCs beat minicomputers, and how minicomputers in turn beat mainframes. See wikipedia for a refresher. What’s new is we’re seeing more than traditional Christensen disruption, as he narrowly defines it. Since I’m most familiar with Ben Thompson’s view on what’s changed, let me start with him. Then compare that to the frameworks of Chris Dixon and Tren Griffin. To be clear, this is my own personal interpretation of their work. So scroll down if you want to jump directly to my Soylent product review. Or if interested, click through the links to read them in the original.

When I tweeted some of the links above, Sina Motamedi replied saying these theories were all the same. An excellent point. On reflection I’d say these theories are about the same business phenomena, but come at it from different perspectives. A good analogy is reading multiple historians of the same event to see it from all sides. Or solving the same math problem in different ways to create deeper understanding. If I analyze Netflix using Thompson’s framework, I’d highlight how Netflix captured premium customers with a superior experience and internet distribution. Then leveraged those customers to streaming, and then again to create original content. A Tren Griffin analysis might highlight the value chain conflict between Netflix and existing TV and movie studios, and how Netflix leveraged its customer base to force (or sometimes not force!) favorable licensing terms. A Chris Dixon analysis might highlight how Netlifx ultimately ended up producing the whole product, from content to distribution. Note the shorthand here where “Dixon” means my take on the full stack theory, not the person, who of course has broader and more nuanced views. Likewise for Thompson and Griffin.

Tren Griffin applied his transfer pricing model to explain how the singer Adele leveraged her market power to capture 100% of the profit from concert ticket sales. An analysis I’m not sure I’d attempt (at least directly) with Dixon or Thompson. As for Soylent, Griffin or Thompson are not my choice. Whereas Chris Dixon drove a16z’s investment in Soylent. In his post explaining why, he says “Traditional food companies are primarily marketing and distribution companies. They blanket the earth with advertising and fight to distribute their products as widely as possible (while blocking the distribution of competing products). As a result, it is very hard to get food that is convenient, affordable, and nutritious outside of wealthy areas where organic and other premium food is available. If you read the Soylent forums you’ll see that – contrary to the caricature of Soylent as a complete food replacement – it mostly replaces unhealthy meals.” In short, a full stack startup. So on to the review.

Soylent the bottled drink is sold directly online costing about $3 per bottle. The web site is serviceable, though they push hard on getting a subscription (uncheck the subscribe box to enable an a la carte order). I’m on my second order and delivery has been fine.

My priors on nutrition are Gary Taubes influenced, in particular I think it’s good to avoid sugar and cut back on refined carbohydrates. Plus (shocker) exercise. See my post.  Soylent is moderate here. Good enough for me.

In practice even though Soylent delivers enough calories and nutrition, I don’t like having it as a meal replacement more than once a day. So breakfast or far less often lunch, but never both. Likely this has do with my stomach and body being used to solid food. This approach of ad hoc meal replacement for junk food instead of total food replacement also avoids messing with your gut microbiome. That is to say, the internet flatulence stories are awesome, but not a problem if you follow the directions.

The taste has light vanilla flavor. Overall I’d described it as having a mild graham cracker/cheerios smell and taste. I found it (perhaps deliberately) bland, but perfectly fine. The comparisons to pancake batter are slightly misleading since it’s a regular drink and not heavy or gooey.

So do I plan to keep buying it? Sure. I drink it a few times a week as a breakfast replacement. The picture at the top of this post is of my car trunk, where I keep a box of Soylent. Which works fine in the California climate where I live. So in the morning if I’m in a rush, when I drop my computer bag in the trunk I pull out a bottle or two for my commute. I also keep a few bottles in a drawer at my desk if I need to skip lunch.

I like the clean white design of the bottle. The packaging dents rather easily, but it’s recyclable/disposable so that didn’t bother me. Soylent has a shelf life of at least a year, which leads to my big complaint. With the shrink wrap plastic cover, you have to slit the plastic wrap to open. See below. Notice how the plastic wrap encases the bottle and the cap together. 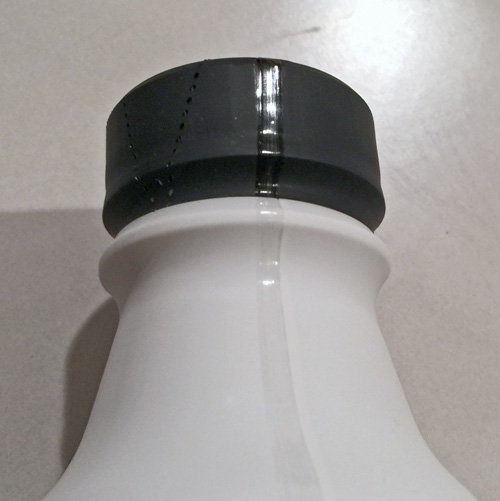 You can use your fingernail to slit the packaging, but it’s far more convenient to just brute force twist the cap off. Which tears the cover as in my picture below. It’s simultaneously not a big deal and surprisingly annoying since it happens nearly every time. Occasionally this leaves bits of plastic on my car floor. I assume the designers at Soylent chose shelf life over a functional twist off cap. They chose… poorly. 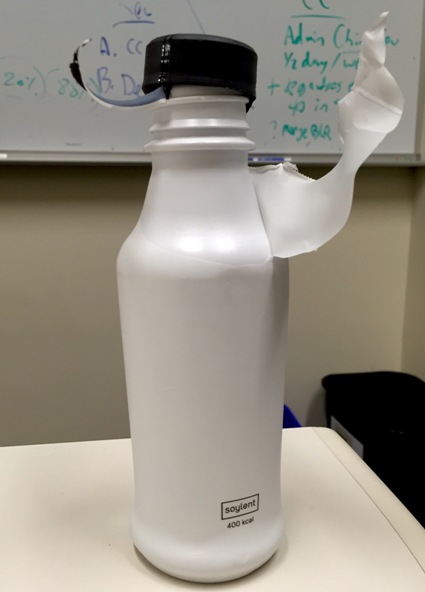