In part 1, we saw how the 10,000 fold decease in genome sequencing costs is creating a golden age for genomics biology. In part 2, we reviewed recent debates about race, genetics and intelligence. Now we can put this together and see how the genomic tsunami is reshaping existing arguments around genes, race, intelligence and human equality.

Recall that the original reason for isolating the human genome was medical. But the medical prospects dimmed because most diseases are from many genes of small effect. It is very hard to isolate what causes what. To illustrate an opposite case, consider eye color. There are 2 main single-nucleotide polymorphisms (SNPs) which determine eye color, OCA2 and HERC2. Note: I’ll start using the technically more accurate terms SNP and alle instead of gene where needed from now on.  While those two SNPs are not the complete story, the total number of SNPs involved in eye color is fairly tractable (less than 20) and the genetics are mostly understood at this point. But for something like height there are literally 1000’s of genes which have influence. How this ties together is figuring out the genetics of height is essentially the same as figuring out the genetics of disease. Many genes of small effect under the influence of environment. Every day it’s getting more tractable.

But…. these same techniques can be used to isolate other subtle phenotypes like brain function and intelligence. So the entire debate around human equality and genetics is about to change. The Bell Curve era arguments used large numbers of people and social science statistical correlations to make arguments about IQ and populations. But the newer arguments from the genomic tsunami don’t look like that. In a 2006 paper Gregory Cochran, Jason Hardy, and Henry Harpending argued that unique variants of the HEXA gene on chromosome 15 caused carriers like Ashkenazi Jews to have Tay Sachs and be smart. It’s a completely new kind of argument. You no longer argue about social science correlations, trying to sort out the relative impact of discrimination and racism. Instead you use genetic techniques perfected to solve medical problems to argue about very particular biological pathways at the molecular level. It’s a sea change.

Under this same tsunami of genetic data, the history of human evolution itself is undergoing profound change as well. Let me steal the following section from a good Dienekes post and break existing views of human evolution into three schools of thought:

Now obviously all three happened, it’s just a matter of how much of each. Migrationists have been out of fashion for a while, but are coming back into vogue based on the latest genetic evidence. The Bantu Expansion is the model. With that said, the genetic data supporting the replacement/migrationist model also shows clear signs of introgression from the populations being replaced (a bit of demi diffusionist layered on top of migration/replacement). Back into deeper time we’re seeing this as introgression into modern humans of Neatherthals and Denosivians. And in fact just this past month a new study is out citing evidence of introgression of another newly found type of archaic DNA in some eastern Africans. We’ll be seeing a lot more discoveries involving archaic human DNA in the coming decades. The point here is that the old story of modern humans coming from a single expansion and being genetically almost identical is changing. Humans populations genetics is showing much more variability than we knew about before, and in fact some of this variation comes from archaic hominum DNA.

Where is this headed? Well, sometime in the next 10-20 years someone will come out with a new version of The Bell Curve. But this version won’t be based on social science correlations of IQ with whatnot. It will argue using the tsunami of genetic data. IQ, character and much else will be tied to specific sets of genes and biologic pathways. As Pinker says in his appropriately cautious comments on the paper about the HEXA gene in Ashkenazi Jews mentioned above ”Reality is what refuses to go away when you do not believe in it, and progress in neuroscience and genomics has made these politically comforting shibboleths (such as the non-existence of intelligence and the non-existence of race) untenable.”

Furthermore, whoever writes the Bell Curve2 will map how various archaic human populations mixed to create today’s global population structure with some kind of scoring system for various traits and abilities. Now ironically of course some of the people who would be most tempted to use such a scoring system will also happen to not score well. So if you are of European descent, do you score yourself very low if you have 5% Neatherthals genes? Or if you don’t happen to have all the genes which biologist says impact IQ scores? Unfortunately history shows this data will inevitably come with attempts to twist it into a politically incorrect racist nightmare.

In this world the original form of Lewontin’s and Gould’s arguments saying race doesn’t exist or that intelligence isn’t heritable won’t survive, despite the fact they continue to be professed publicly by many scientists. With that said, it will be easier to argue against race as culturally understood. Saying someone like Tiger Woods is “black” for instance won’t make much sense, if it ever did. The old racial constructs will be replaced (at least scientifically) by a true map of human ancestry for anyone who wants it. We should expect everyone on earth, or at least in richer countries, to have their genome typed and understood (at least by their doctors). This genome typing will provide genetic profiles of possible health risks, which is great. But along with this will come full details of everyone’s individual human ancestry, plus statistical estimates for all kinds of traits like height, immune response, eye color, musical talent and of course intelligence. For celebrities, the ubiquity and cheapness of this technology will lead to tabloids publishing DNA taken from coffee cups. Gattaca is coming whether we want it or not. I’d like to go back again to Pinker’s comments on the 2006 paper where he finishes his essay by saying ”the power to uncover genetic and evolutionary roots of group differences in psychological traits is both more likely to materialize and more incendiary in its consequences. And it is a prospect that we are, intellectually and emotionally, very poorly equipped to confront.”

And of course that’s where the worst of the trouble lies. Generally people can live with the fact that individuals are like their parents. But group differences are where things could blow up. So it is important to remember that Richard Lewontin was right in pointing out that most variation after all is within any group, and genes aren’t destiny. In fact there is a common misconception that all genes work in a very deterministic fashion like eye color. They are a blueprint which locks everything down. This is not true, and the deterministic view of genetics is partially a legacy of racism itself. Take a look at these cloned cats with identical genes. 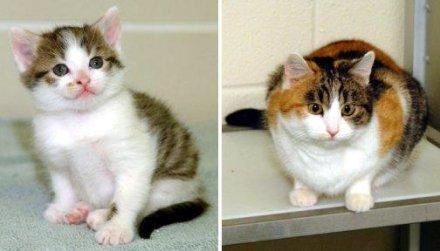 Same genes, different phenotype. I like the calico cat examples since their fur patterns are different even for clones with the identical genetics. This is because genes are expressed differently in each individual.  The bad movie view of clones being identical is just bunk.

And this is the weakness of the deterministic view of genetics. Genes aren’t some kind of original sin that fatalistically locks your destiny. Genes are just one card out of life’s uneven deck. Choice matters. Chance matters. Effort matters. So while genetic tests will be ubiquitous in the future, experience with the technology will make people also take them with a grain of salt. Even after the 23andme results improve from where they are today, they’ll merely give probabilities with fairly wide error bars of what might happen. In reality, it’s easier to estimate the chances of Michael Jordan’s sons in the NBA by applied common sense than by looking at a DNA test, which by definition can’t take into account the cultural or personal aspects of life which are as important as genes. At a deep level we should expect most of the results of genetic tests to be banal. They’ll be banal because we already know most of what we’ll get out of genetic tests merely by looking at our relatives. For example, I’m going bald. But I didn’t need a genetic test to know this would happen, just a picture of my grandfather.

If Neatherthals or Hobbits or Denisivans had survived to the present day, we know what Stephen Jay Gould would tell us. He would correctly tell us they are human beings. No more. No less. And the morality of human equality is not so fragile as to depend on having no genetic differences between individuals or groups. Human equality is a moral concept we can hold firmly regardless of any genetic differences. What genetics has shown us is archaic humans contributed to the modern human gene pool, so in some sense those past humans are living among us right now. We already know how to treat them. Like people.